The classroom of Williams 225 on Ithaca College campus buzzed with excitement and creativity as the e-board and performing members of Spit That! , Ithaca College‘s only spoken word poetry club, prepare for the upcoming Annual Spring Showcase. This year marks the 10th anniversary of Spit That! as an organization within Ithaca College and the club members are eager for this year’s guest performer Jaylene Clark Owens.

Owens, the original founder of Spit That!, studied at Ithaca College as a Martin Luther King Jr. Scholar and a member of the ALANA community. Owens was president of the Spit That! club during the entirety of her undergraduate years and started the Annual Spring Showcase tradition.

“As the creator of the club, she knows more than any of us what it means to have a secure place to show up every week and share the innermost thoughts that dance around our heads all day. If it weren’t for her determination and leadership, Spit That! would not exist today.” Said Toni Marie Landy, the public relations representative of Spit That!

Upon the conclusion of her Bachelor’s Degree in 2009, Jaylene Clark Owens has been pursuing her acting career in both New York City and Philadelphia. She is a member of the Harlem Art Alliance, a group dedicated to cultivating emerging visual and performing arts in the New York City area.

Since moving to Philadelphia in 2013, Jaylene has been a member of multiple theatre productions including the Barrymore Award nominated play, The Most Spectacularly Lamentable Trial of Miz Martha Washington at Flashpoint Theatre Company and has won an ADELCO award for recognition of excellence in Black Theatre.

Spit That! and its Legacy

The current  Ithaca College SpitThat! club has held multiple work shops and auditions throughout the year to prepare for their Spring Annual Show Case.

“The Spring Showcase is a monumental event for us,” said Michaela Abbott, Vice President of Spit That! “We have the best of the best performing for the showcase.” 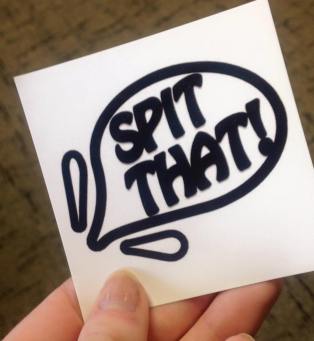 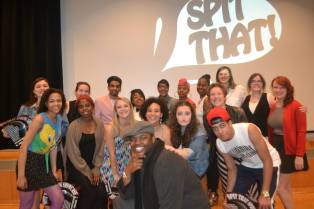 Performers from the Annual Spring Showcase of 2015

“Over the past ten years, Spit That! has grown as more than just an organization, bringing people from all over campus together and teaching the importance of finding your voice through a poetic medium. Spit That! aims to be an outlet for our government body where they can share things they otherwise wouldn’t or challenge controversial issues through an innovative and artistic sense. With a club like this, we have the ability to grow together as a group while also fostering a sense of self-growth that might not be found elsewhere.” Landy said.

Spit That! has expanded from the campus to the community of Ithaca. Spit That! has participated in slam poetry events with the Cornell Swoopers and Bashers and performed for Ithaca High School during Social Justice Week to show how poetry can also be used as a form of activism.

“Spit That! always has the goal of being better. We are always asking ourselves “what’s missing?” or “what’s something different we can be involved in?” Our goal is to keep this legacy going, keeping the safe space aspect while also learning the areas we need to improve upon.” said Landy.

The Annual Spring Showcase will be held on April 22nd in the Park Auditorium at the Roy H. Park School at Ithaca College.