The “Get in the Game. Save a Life” event was held and staffed by the Ithaca College Football Team in Emerson Suites, Campus Center at 10:00 a.m. Thursday, March 31st. Conners was there celebrating his first whole year being cancer free and showing his support for the Bone Marrow Registry. 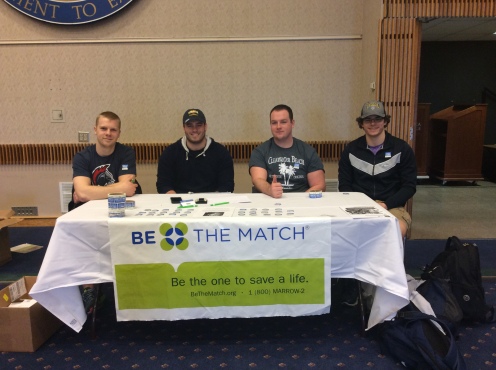 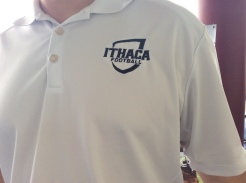 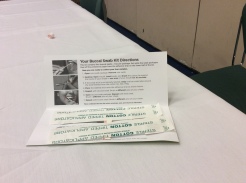 The tables in Emerson Suites, on Ithaca College campus, were packed with informative packets about the Be The Match organization, the bone marrow registry and how to become a donor.

“Do you have ten minutes to help save a life?” The football players called to the students that walked by. “All you need to do is swab your cheek, see if you’re a match for a bone marrow transplant.”

Since the “Get in the Game. Save a Life”, started in 2008 Talley has succeeded in expanding the program to colleges and universities throughout the United States.

(Past and present schools that have participated in “Get in the Game. Save a Life” program.) (From BeTheMatch.org)

“By expanding this program to more and more players, we greatly improve the chances that more patients will receive the transplant they need. I admire the dedication of these young men, as well as their coaches, classmates and friends to make this program a success.” said Talley on BeTheMatch.org.

Bone marrow transplant is a procedure that replaces the patients ineffective bone marrow and is an essential step in treating blood related diseases like leukemia, sickle celled anemia, multiple myeloma and other immune diseases.

Conners  was diagnosed with T-cell acute lymphoblastic leukemia, lost his vision and his chemotherapy was proving to be ineffective. Conners’ bone marrow transplant completely turned his diagnosis around.

“I was very blessed to not only have a match in my family, but that my brother was a perfect match. But you’re not guaranteed to have a match in the family.” Conners explains that the chances of a familial bone marrow match is less the 30 percent.

“That’s why I think it’s so important for people to just get into the registry,” said Conners.

Head of the Ithaca College football coach Mike Welch  said “It’s an opportunity for people and our players to actually save lives. We’ve had five Ithaca College students that have been matches as a result of this drive.”

The “Get in the Game. Save a Life.” program has registered over 52,000 potential donors and has resulted in over 200 successful transplants.

“We’ll continue to do this every year.” Said Mike Welch. “This program truly is a godsend.”